L.I. Smith & Associates, Inc. (LIS) is a full-service, integrative engineering and surveying company that provides services to the public and private sectors. We are headquartered in Paris, TN, with branches located in Portland and Nashville.

We are currently looking to hire a licensed Civil Engineer (PE) to join our Paris office. We are looking for someone that wants to build a team and lead. The Civil Engineer will work with our team of engineers to plan and design a variety of land development projects with major tasks such as stormwater management, environmental permitting, and utility design.

Projects and tasks will involve the use of various software programs including Civil3D, AutoCAD, and Microsoft Office applications.

An ideal candidate will possess excellent leadership skills and will thrive in a team-focused environment.

To apply, email your contact information and resume to careers@lismith.com. Be sure to include the job title you’re applying for in the email subject line.

Only two years after their inaugural season, the Nashville Soccer Club is building a new practice facility at Century Farms in Antioch, Tenn.

The practice facility project began in August of last year and is scheduled to be completed by early 2023. The new practice arena will have three soccer fields, a health clinic, a maintenance building, and a training facility.

The 58,185 square-feet building will have other features such as locker rooms, weight rooms, media rooms, staff offices, lounges, and a hydrotherapy facility.

L.I. Smith & Associates (LIS), as a subcontractor to Messer Construction, has assisted the Nashville Soccer Club by surveying the 15-acre area located at Century Farms, providing construction layout for electrical services for the facility. The surveying team began to survey the area last fall and continues to be called to the site as needed.

The Nashville Soccer Club is the state’s first Major League Soccer (MLS) team. The club’s first match, held in 2020, was played in front of 59,069 people, which made it the highest attended soccer event in the state of Tennessee.

On May 1, 2022, GEODIS Park, the club’s official home, opened and held its first game. Now, a practice facility is to be added to the team’s repertoire.

The club held a ceremony in early October for breaking ground at the new facility.

The L.I. Smith & Associates (LIS) Staff Photo Competition is a unique opportunity for staff members to share the interesting, behind the scenes aspects of their roles, while also getting creative! Our workforce is comprised of professional surveyors, field crews, professional engineers, and administrative personnel. Our field personnel travel throughout the Central and Southeast regions of the country, while our office staff commute to three separate office locations. Each staff member’s role is different. No two workdays are alike.

In order to showcase the unique experiences of our staff, we challenged them to submit images that reflect their day in the workplace- wherever that may be.

Each month, one photo is chosen as the winner. Additional photo(s) are also highlighted as honorable mentions. A grand prize winner will be selected at the end of the year. This month’s winning image and honorable mentions are featured below along with submission descriptions and the photographer’s name. Congratulations to all of our staff members for their incredible, creative images. 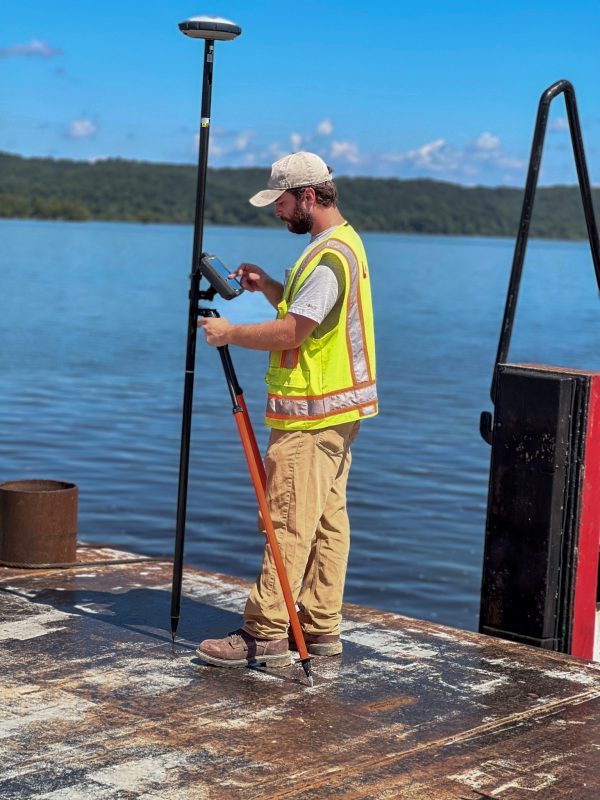 Pictured above is Drew Smith on a barge in New Johnsonville, Tenn. doing check control for a new outfall line that is being put in at Kentucky Lake.

Drew has been working at LIS since March and is located at the Paris office. 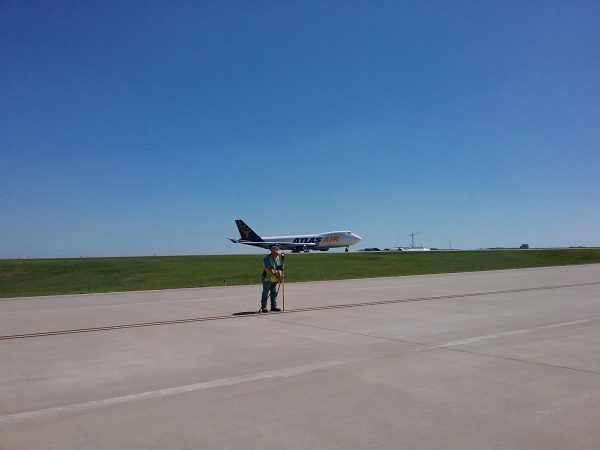 John Snow was performing a control network survey for a project at the BNA Airport in Nashville. LIS is working on a team with Hi-Way Paving to replace taxiway Alpha Kilo.

John has been working at LIS for 27 years and is currently in the role of a Party Chief. 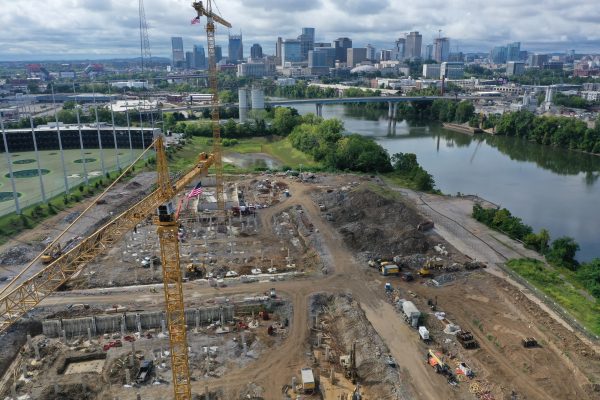 Mike Ilko was doing photogrammetry, the science of taking measurements with photos, for the River North project Cowan Street in Nashville. Mike was capturing pictures to measure the quantities of dirt and fill they had stockpiled on the site.

Mike is a Survey Coordinator and captures drone footage for LIS.